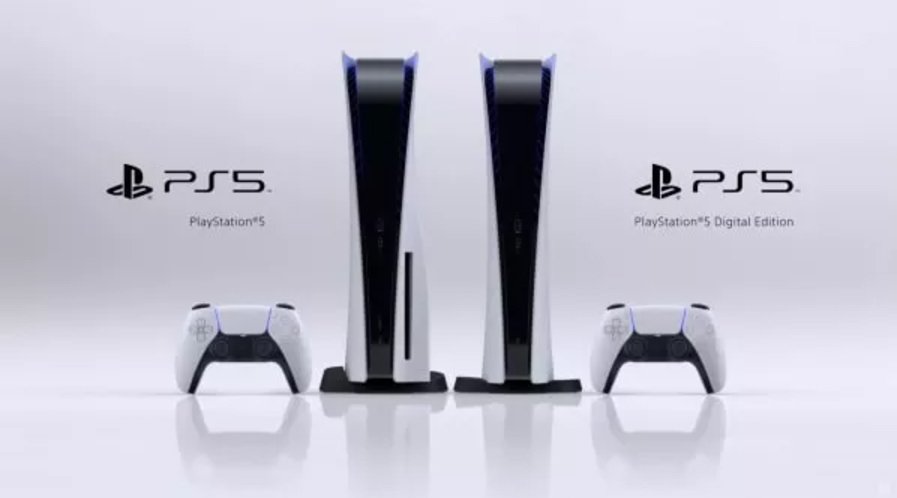 The PS5 design was officially revealed on June 11, 2020. Watch the PS5 hardware trailer above.

When it came to the reveal of the console itself, Sony nailed it – the icing on the PS5 games reveal event, and with a few surprises in store too. Not one, but two PlayStation 5 consoles will launch – a standard edition with a 4K Blu-Ray disc drive, and a slimmer, disc-free Digital Edition.

Both make use of USB-C charging for their controllers, and can make use of a HD camera accessory, alongside a new PS5 wireless headset and media remote.The consoles themselves feature a striking design that’s sure to split opinion.

A curvy mixture of black and white plastics with blue highlight lighting, it’s far removed from the ‘black box’ designs of previous PlayStation consoles. What was not revealed however, were pricing and precise availability, which remain a mystery beyond the aforementioned ‘Holiday 2020’ window.

The digital edition sees Sony moving with what’s increasingly becoming a physical-media-free hobby, banking on players to make use of digital downloads and streaming services rather than buying games or movies on disc-based hardware.

It’ll certainly make swapping games with friends a challenge, as well as trading them in, and gaming stores will likely be a little worried by its presence – especially if it proves significantly cheaper than the main version of the machine. But for those that enjoy building a physical library, the disc-based console remains an option at least.

Here are some shots of the PS5 design:

Sony has officially confirmed that the PS5 will release globally “in time for Holiday 2020”, so likely some time between October and December 2020 – putting it in direct competition with the Xbox Series X, which is releasing in the same window. A leak has suggested that the release date will be November 20, 2020 but that’s yet to be confirmed.

However, this date would be in the right window, as we’re predicting the PS5 will release in November, 2020. November is historically when we’ve seen PlayStation consoles launch and it would leave time before Christmas to get those orders in.

AMD, the tech giant that’s been commissioned to make the processor and graphics chips in both the PS5 and Xbox Series X next-gen consoles, is “ramping up production” to prepare for their respective launches, AMD CEO Dr Lisa Su confirmed in early May 2020. This timing too is also suggestive of a November launch window.

Despite rumors, a Sony has confirmed the PS5’s release date has not been delayed by Covid-19 so we will see the next-gen console release in late 2020 – even if we’re not sure exactly when that will be.

You may want to know what gcontrollers are selling on PS5’s accessories:

Gcontrollers.com is owned by a small group of women. We not only keen on providing good video game products to our customers, but also contribute in charity. Each transaction will donate 1yuan (0.15USD) to China charity.